Hokitika Junk2Funk, the annual fashion and art recycling event held at Carnegie Gallery, Hokitika Museum from 10 – 27 July. After missing the event last year because we were overseas, I put two entries into the exhibition part of the event. 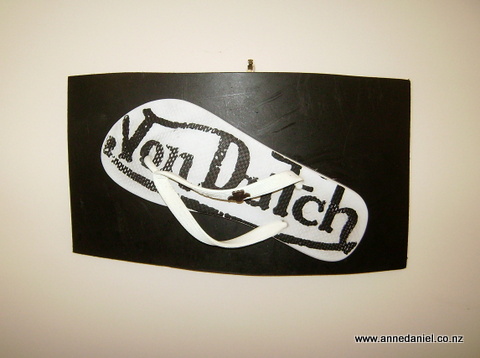 Materials –found objects: rubber jandal and a piece of a polythene plastic container

I found both items while collecting seaweed on Mananui Beach, just south of Hokitika. Both – the plastic stock storage container (in several pieces) and the jandal – had been dislocated from their original site of use and washed up again on the beach, the jandal without its mate. The jandal represents the immigrants who “washed” up on the shores of Aotearoa New Zealand, including the Dutch, to set up new lives leaving behind families and friends.

On completion of the art work, I decide to investigate “von Dutch”. It is the brand of Kenneth Howard – American rebel icon and legendery artist known over the world as von Dutch, father of the “Kustom Kulture ”movement such as pinstriping on motor cycles and cars.

“Use any of my stuff you want to. Nothing is original. Everything is in the subconscious, we just tap into it sometimes and think we have originated something. Genes make us more or less interested in certain things but nothing is truly original. Copyrights and patents are mostly an ego trip.” vonDutch 1992     www.vondutch.com

After his death in 1992, his daughters sold the von Dutch name. The clothing brand gained popularity in the US attracting the attention of celebrities, interesting in light of van Dutch’s thoughts.

This wall hanging was woven on my 4 shaft table loom using used audio tape for the warp. The weft was made from the plastic bags that our local newspaper, the Hokitika Guardian, comes wrapped in when delivered. I collected these over a period of time.