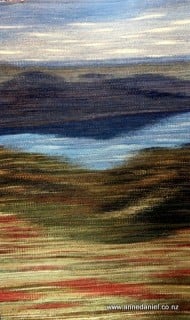 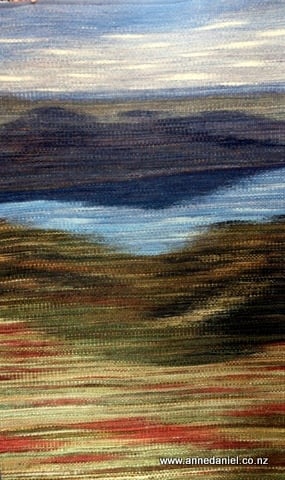 This rug had a long gestation but was worth it. My son and daughter-in-law had asked me if would weave them a rug as a present for their wedding in March 2010. I wanted to make sure that they had input into it – colour, style etc – and this took time.

When they were visiting in October 2010 we discussed colours and what they suggested sounded like those in a photo I had taken a few days earlier when as a family we had climbed Mount Tuhua near Hokitika. The photo was the view from the summit looking over Lake Kaniere and out to Hokitika and the Tasman Sea with bush in the foreground – greens, blues and some red highlights. So this formed the basis for design. 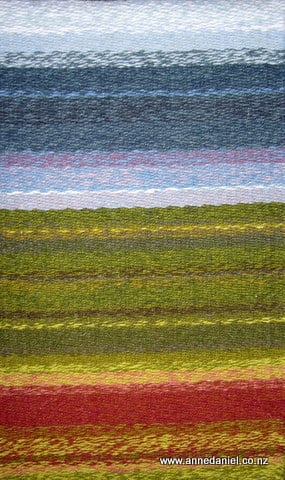 But what technique should I use? Another year went by and l showed them some samples I had woven in various techniques, including a small weft-faced one in carpet wool, From Tuhua, shown here.

However we decided to go with using carded wool in a weft-faced weave. By this time I now had acquired large amount of fleece wool from my father, and a drum carder which hadn’t been used. I had a lot of fun washing, carding and dyeing the wool. Some of the newspapers separating the layers of flick-carded wool dated from the early 1980s, but the wool was fine.  I made all colours from the three primary colours and black and also did blending on the carder to achieve the colours I wanted which was satisfying and a lot of fun. I used linen for the warp with a sett of 4 epi. Each short piece of carded fleece was placed in the weft and I put in a binder tabby weft of carpet wool.  This was the first time I had woven a rug like this. Of course you can only see a short piece while you are weaving on the loom and so it was an exciting moment when I cut it off the loom.
I was very pleased to be able to present the rug to Philip and Kerry when we travelled to Wellington in June and before this I had shown my father what I had made from some of his wool. Overall I had a great sense of accomplishment with this project.