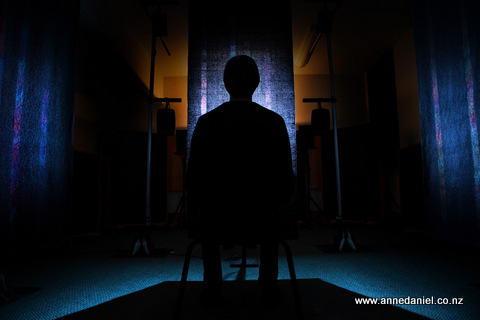 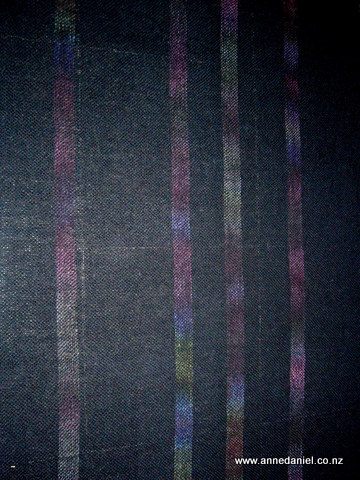 My daughter’s partner, David Rylands, asked if I would be interested in a project with him. He was doing a music installation for a conference and he wanted five panels to enclose the space where one person would sit in the middle of many speakers listening to his electro-acoustic composition.

The brief was for five panels 2.5m x 1.1m in black but with some colour and in an open weave so light could shine through them. I had lots of a grey/green carpet wool which I dyed black and then randomly dyed some white carpet wool, with blue and red. Each panel had four narrow asymmetrical stripes in this coloured wool. 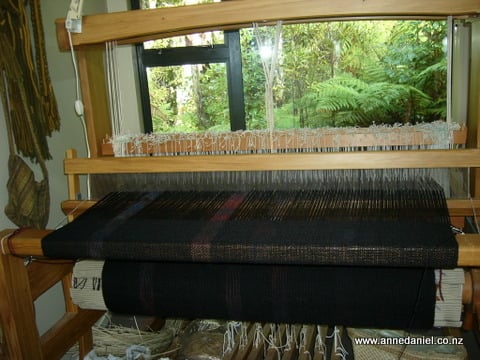 I wove 15m, took it off the loom, cut it into lengths and I zig-zagged the ends. I did some sampling of the fulling process to get the desired degree of openness. I decided to do it in the washing machine so I could put all the panels in at once and get them fulled evenly. Not a good idea. I was carefully noting how long I was fulling and stopping and looking at regular intervals. Nothing seemed to be happening quickly which was good. Eventually I decided that I had done enough and started taking the panels out. To my horror, I found that the underneath panels had been over-fulled – starting to felt. What a disaster; so much for getting them fulled evenly. I tried pulling them into shape which of course doesn’t work. I let them dry. Three were fine but two were too distorted to be used. I was not happy that night.

The only solution was to weave another couple of panels – another five plus metres. But before that could begin, more dyeing was required. I tied the new warp onto the old one so that I didn’t have to thread the loom up again. Then I began the weaving again.

I had fun finishing the panels to the same length. Fortunately we have a 4m stud height on one side of our house. After hemming the top of each panel and thread it onto a rod, I was able to hang across from the corner of 3m high free-standing wall and onto a tall ladder, and from there could get the hemming line. It was a moment of relief when I finally sent off the five panels to David in Auckland.

David hung the five panels for his installation A Family Wheel which included 18 loudspeakers and was ideal for one-listener. This was for the Australasian Computer Music Conference –  Organic Sounds in Live Electroacoustic Music. 6-9 July, 2011. School of Music, University of Auckland Auckland, New Zealand.