After last year’s experience of creating a sculpture on the beach at Hokitika for Driftwood and Sand, I was hooked and couldn’t wait to do it again. A month beforehand, there was little driftwood around or even much beach, and it was decided to cancel the event. However one storm can change a beach significantly, and event founder, Donald Buglass, stepped in and ran a much pared back event – just the beach sculpture part, no workshops, public voting etc .

This time I chose to use the noodling technique with harakeke (NZ flax) and so began by looking for a large interesting piece of driftwood with branching to form the frame for noodling. I found just the piece – part of a tree with trunk. With it lying on the ground, I began the noodling – randomly weaving narrow strips of harakeke around the framework and through each other. Once this was done, the next part was to get it upright and buried deep enough in the sand to stand on its own. Then I began collecting more driftwood to go around the base to form the hull of a boat with the upright noodled piece being the mast and sails, and so merged Voyage.

The event attracts lots of visitors as well as locals and it is always good talking to people as you are creating.

The format this year was a rather different in that the overall winner was judged by local artist, Brent Trolle, and not by public vote as in the past, and there were no prizes, just the Driftwood and sand trophy. 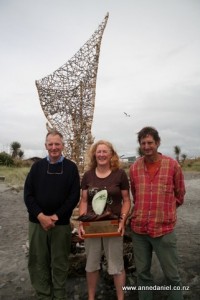 I was at home on the Sunday afternoon when Donald rang me and asked where I was. He told me I needed to be at the beach as I had won. I couldn’t believe it. I didn’t have a vehicle available so hopped on my husband’s bike and biked the 5 km to the beach. Just before I got there and within site of the people gathered, my bike wheel caught in a grating and I couldn’t get my feet out of the pedals in time and ended up in a heap on the road with blood on my knee – quite an undignified entrance.

I was ecstatic over the win as it was recognition from an established artist.

A high tide came in the day after the closing of the event and when we went back to have a look found the vertical part washed some distance up the along the beach lying down but still intact. So we brought it home and erected at the end of the lawn in our garden.