I was invited to participate in an exhibition to celebrate Hokitika’s 150th anniversary of the gold rush. Recollections is contemporary West Coast artists reflecting on the past.

As a fibre artist who works in harakeke (New Zealand flax), it is probably not surprising that during a tour of the Hokitika Museum collections, a fringed kete muka**, woven by Ripeka Te Owai in 1907, attracted my attention. I returned for a second visit and was able to view three other kete muka as well as some other items woven in harakeke.

At the same time I had been doing a lot reading about the gold rush days on the West Coast and was inspired to create some wall art work in harakeke that depicts this aspect of our history, using traditional techniques observed in the museum items. This created a connection between the tangata whenua and the new arrivals. I feel honoured to have been able to view the items woven in the past and thank the weavers for their inspiration and for challenging me to learn and put into practice new techniques in creating my artworks.

Life in the gold rush days would have been very challenging so it is appropriate that I have had my challenges during this project too. A short time after my second museum visit, while the ideas were still developing, I broke my leg badly and the following weeks saw all my energy going into healing the bone. The creative juices dried up and when they started flowing again, I needed to harvest harakeke before I could proceed. Being on crutches prevented me doing this myself. After a quick lesson, my husband Rob did a wonderful job of cutting from specific bushes in my pa harakeke. Again when it came to dyeing, he carried all my equipment to the centre of the kitchen floor and placed a stool for me to sit at the stove.

Overall the journey creating these works has brought me closer to the past – both to the Maori weavers and those who arrived for the gold rushes. 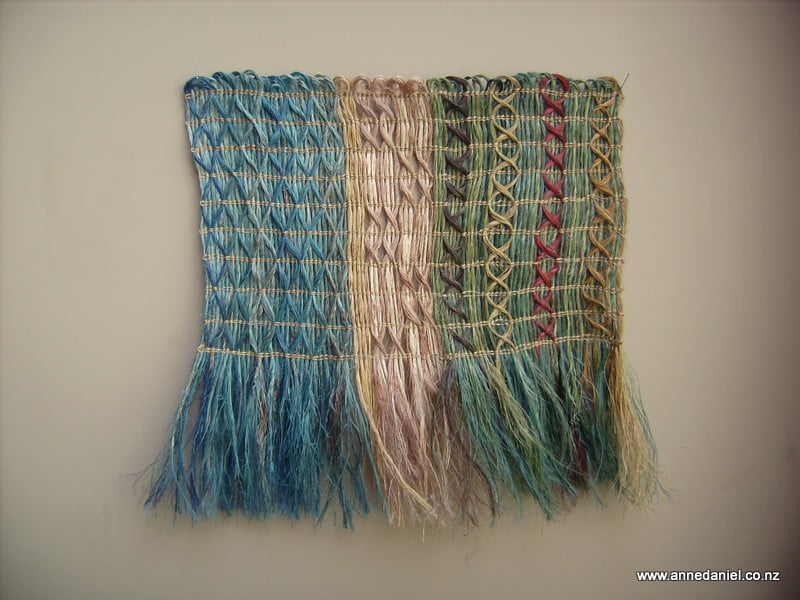 Hokitika 1865 – the Lure of Gold is a wall hanging woven with dyed muka. I actually unplied the muka for this piece and then twisted it as I wove as this is what I observed in Ripeka’s kete. The warp is in three sections – the blue representing the Tasman sea, the route by which most of the newcomers arrived; the central section is the beach and the growing town of Hokitika; the green is the thick bush with vines, that the diggers had to penetrate to search for the gold in the streams. The weft threads are gold which lured them to Hokitika in the first place. A different pattern is used in each section to further depict the landscape and each is inspired by the patterns on three different kete muka. 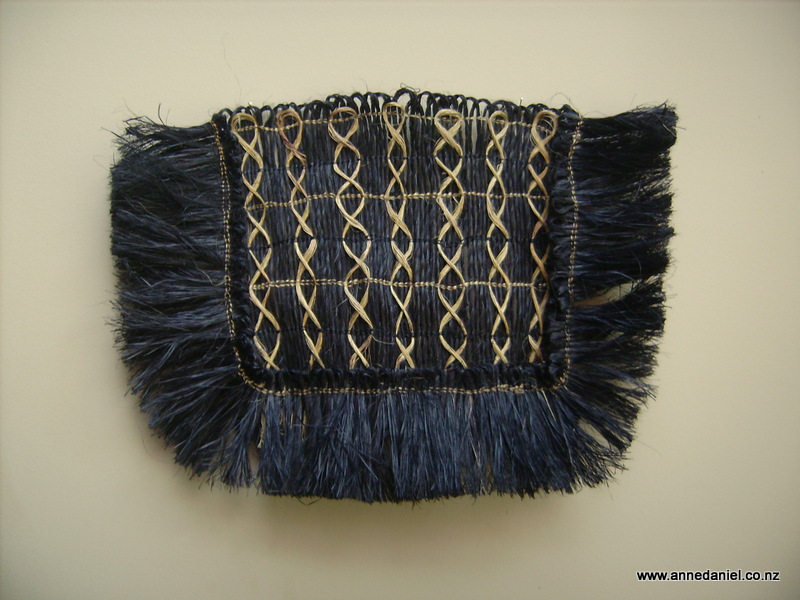 Black Sand Gold is a woven wall hanging in muka dyed black and gold. It is styled on the kete muka in the collection which were all fringed. Gold was found in the black sand on the beach. 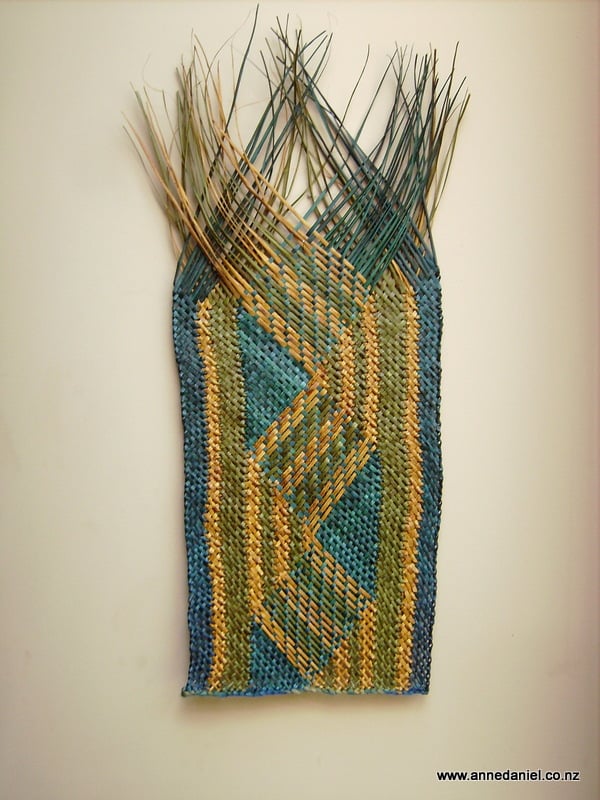 Gold Strike – is a wall hanging woven in narrow strips of harakeke using the traditional raranga method. The pattern is based on that in a small mat/runner in the museum collection but using dyed weaving strips – again  to represent water, bush and the gold. The unwoven ends at the top of the piece contrast to the highly structured weaving. For the diggers, their arrival on the Coast was a leap of faith but where was the discovery of gold going to take them?

** Muka is the silky fibre that is extracted from harakeke leaves. The preparation of muka is time consuming and while I had done it before, it was never on the scale required for my planned works. Each leaf was split into 15mm strips. After making a narrow cut on the underside of the strip, the green part was removed in the traditional way using a mussel shell leaving silky fibre. For each strip the fibre was divided into two halves and spun into a two ply cord by rolling along the leg, then soaked overnight and dried. After making bundles of similar lengths, the bundles were wet and pounded between two stones to further soften the fibres, a process which was repeated several times and dried. At this stage the fibre was ready for dyeing which I did in small batches with Teri Phormalan dyes to get the colours I wanted. The prepared two ply fibre was used as the whenu or warp threads, while just a few strands were used for the aho or weft threads.