This year there was a good lot of driftwood on the beach at Hokitika for this annual sculpture event and I started off with the idea of creating a large container from driftwood laced together with harakeke (NZ flax), similar to a coiled pot. All was going well and some people thought it looked like a creel.

As part of Driftwood and Sand,  a film on Andy Goldsworthy’s work was shown one evening. He creates installations in nature which are dynamic and a response to the location. I found it fascinating and quite inspirational, and as it turned out timely. 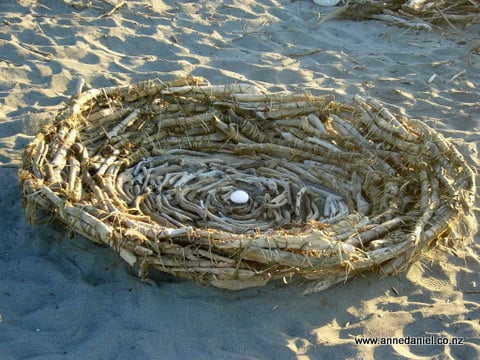 “The World is Your Oyster”

A day or so later, I was adding some more driftwood to my sculpture when it began to move. As I tried to make an adjustment, there would be movement somewhere else and then the whole work started to collapse. Soon it was maybe half the height or less of what it had been. I thought of some of Andy Goldsworthy’s work that had changed, say with the tide and so I was able to view what had happened as a positive thing and could go along with it. The result was The World is your Oyster. I believe my resulting sculpture was much better than what I originally intended.

While scavenging for driftwood for this work, I had come across some other interesting pieces and created a second fun piece entirely out of driftwood – no harakeke at all! – and called it Monkey See, Monkey Do. 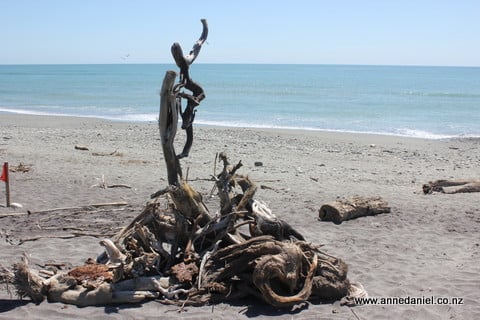 What a privilege to be able create in such a stunning environment.