I entered four art works in the Creative Fibre National Exhibition which was held at Dunedin Railway Station from 24 -28 April. This was the first time I had entered anything.

My husband Rob and I travelled down to Dunedin for the opening of the exhibition. It was great to see my works on display with so many other wonderful exhibits, and it was obvious a lot of care had been taken in the placement and hanging of the three wall pieces.

Then came the opening of the associated Creative Fibre event the following afternoon when the exhibition awards were announced. I had an inkling that I must be getting one as I had not planned on going to Dunedin but got a phone call to strongly suggest I should be there. So I was thrilled to hear my name announced for Ashford First Time Entrant Award for my piece Radiation.

This piece is woven from the centre and spreads or radiates from there. The colours in the hand dyed harakeke (NZ flax) from my own collection are inspired by the ocean. The form evolved from trying to weave something else. 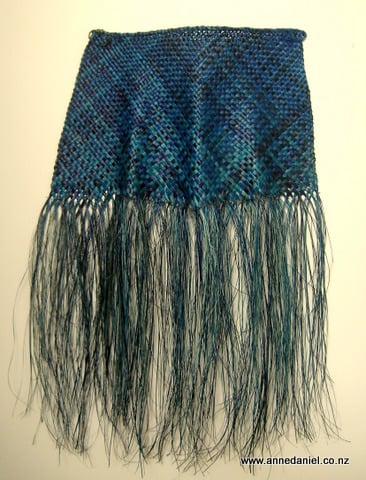 I was rather surprise then hear that I had been awarded the Colour Award of $250 sponsored by Dea Nominees Ltd., for the best use of colour.
The colour, sheen and wave form of this piece, Moana Nui (ocean) is inspired by the ocean. Various shades of blue were used in the hand dyeing of harakeke (NZ flax) harvested from my own collection. 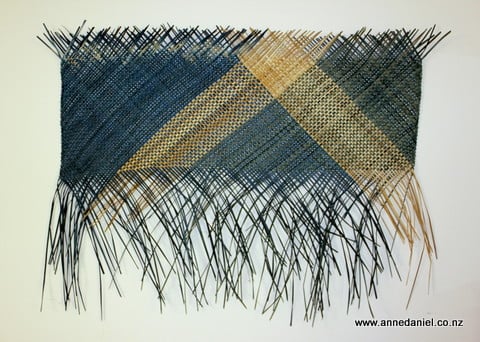 But there was more. By the time my name was announced as winner of the major award, the Creative Fibre award, for Te Tai o Poutini I was completely shell-shocked and could hardly make my way to the front to receive the trophy and $2000. It was special having my husband and Creative Fibre friends from the West Coast with me for the occasion.

This piece Te Tai o Poutini  is inspired by the area of Aotearoa New Zealand where I live – Te Tai o Poutini o Te Wai Pounamu, the West Coast of the South Island. The blues are the Tasman Sea, the greens, the bush, and the undyed fibres, the beach. Then these overlap. The rough edges represent the ruggedness of the sea, land and coastline.

I was humbled to receive this recognition of my work and honoured to have weaving in harakeke recognised by Creative Fibre in this way.

Holding the trophy surrounded by the West Coast contingent

I also had another entry, Helter Skelter,

This three dimensional piece (18cm x 15cm 15cm) is a small pot created using a twined basket-making technique with shredded harakeke (NZ Flax) on a harakeke uprights. The plaited finish reminds me of a helter skelter at an English beach from a childhood story book. The finishing piece of paua grounds it at the beach.

The first time entrant award included a $500 voucher from Ashford’s. Before leaving Dunedin, I checked out their stand in the trades hall and put the voucher towards a Katie 8-shaft portable table loom (read about my first project on it here), a jumbo flyer and some other goodies. Thanks to Kate and all at Ashford’s.

Radiation was sold to one to one of the women who helped set up the exhibition and she has shared with me her reaction to the piece when she first saw it. I have had some wonderful moving communication with her.

An article on my weaving journey, Influenced by Nature, appeared in the Creative fibre magazine (Vol 17 No 1, June 2014, p16) and the cover image was a close up of Radiation.